2013 came in with many blessings, prospects and challenges. As the cliché goes, charity begins at home, and so after the foundation made a public appearance in Cameroon, the moment was right for us to introduce the foundation to its base here in the United States of America. Hence the first six months were spent on planning for the grand launching of the foundation which took place in July 2013 with a soccer competition, health seminar and fundraising dinner that featured ace Cameroonian musician Henri Dikongue and the Lions’ Club Band. 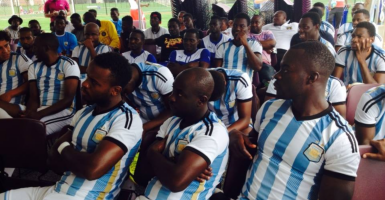 Soccer Competition:
There is no gainsaying it that soccer is a favorite pastime for many Africans. In fact, many African countries soccer is a religion. Even here in the United States, African Diaspora hubs host soccer clubs which organize competitions throughout the year. The DC metro area made up of Washington D.C., Maryland (MD) and Virginia (VA) form a complex nexus and is a proud host of many African immigrants. It was fitting then that part of the launch of the foundation, an outreach program through soccer be a part. Under the distinguished leadership of Cameroonian soccer veteran and fan, Tabi Emmanuel, six teams registered for the competition. On Saturday June 29th, 2013, the competition went through its knockout phase at the 7901 Meadow brook Lane Chevy Chase, field. This was an all-day event with each team playing a least one game and the winners of each game moved on to the semi’s and then there was a second match pitting best runners up to get the last qualifying team for the semi-finals. After two hours recess, the semis took place and two finalists emerged namely Spartan FC and Team Opopo FC.

The finals pitting the famous Cameroonian soccer team Spartan FC against the veteran club Opopo FC took place at the Blair High school on Friday July 2013. He two finalists are popular Cameroonian teams in the DC area. He rivalry was visible and the anxiety palpable. The popularity of both teams showed off as supporters of both teams filled the stands and cheered off their teams. It was a very highly entertaining game with a high display of skills from a pool of talented players mostly veterans.

In furtherance of the goals of this event, there were messages on HIV/AIDS and Hepatitis B displayed throughout the sidelines of the pitch. What is more, The Agatha Foundation provided jerseys to both teams which carried the message: Health is wealth – Let’s stop the spread of HIV/AIDS.

In the end, penalty shootouts determined the outcome of the game as Spartan FC outplayed team Opopo 4-3 and lifted the coveted trophy of the first edition of the AIDS Cup which carried a cash prize of $3000.

Health Fair:
A central part of the foundation’s launching was a one day health seminar meant to sensitize the public on three important diseases affecting the African Diaspora community in the US namely HIV/AIDS, Hepatitis B and Diabetes. To this end, the foundation partnered with a series of public health administrations within the DC metro area. Thanks to the benevolence of Montgomery county, we were able to secure the strategically located Silver Spring Civic Center for the health fair. We took advantage of our proximity to the locus of the federal government and partnered with the Office of minority health resource center, then DC department of health, and the Prince George’s and Montgomery counties’ departments of health. Highlights of the day included an educational component, free testing and other outdoor activities graced the event.

The education component was led by Mrs. Korto who spoke at length about the health habits of African immigrants and the need for a cultural change while making a plug for the Affordable healthcare Act and its benefits for the African communities. She stressed the need for fundamental changes in mindset and the different resources available within the federal government for the health of African immigrants. Drspoke about diabetes and materials on Hepatitis were distributed o participants.

The DC department of health provided free screening for HIV/AIDS. Amazingly, this turned out to be very popular as it attracted lots of people who gladly sought to know their status. In fact, given the strategic location of the mobile van next to the bustling Silver Spring mall and movie theatre, curious onlookers excitedly stopped by and go tested.

The foundation also set up shop to provide basic medical checkups for participants. There was a corps of volunteer nurses who took time to check participants’ high blood pressures and other vitals. This was meant to serve as a wakeup call and reminder to folks of the necessity for regular checkups. The average African immigrant does a medical checkup when he/she starts feeling abnormal. Regular checkups make it easier to catch and treat quite early any diseases.

The third leg of this fair was community outreach building partnerships with grassroots movements. Hence there were vendors who set up outside selling and introducing their products and services to participants and the community.

Overall, this part of the launch enabled the foundation to build a rapport between government agencies at federal, state and county levels in a bid to leverage opportunities and resources. It provided a base for professionals with a heart for volunteerism to get aboard.

In a bid to eschew the temptation of letting soccer trump the real focus of the launching the foundation requested teams participating in the soccer competition to send members from their respective teams to participate at this seminar as part of their eligibility to take part in the competition.

Fundraising Dinner:
The event cruised to is crescendo with the fundraising dinner that took place at the Plum Orchard Conference Center. It was a star studded event that had la crème de la crème of the Cameroonian community in the DC area. It was a three part event under the distinguished aegis of ace Cameroonian journalists Eric Chinje and Anne NkwainNsang. The patronage of the Cameroon’s ambassador to the United States of America His Excellence Joseph Foe Atangana gave a diplomatic color to the event.

Music was a part of the event and Henri Dikongue flew in from France at the invitation of The Agatha Foundation making the evening worth its weight in gold. The reputable Cameroonian band “Lions Club” animated the evening and in a rare appearance, another Cameroonian Ben Decca took the stage and moved the crowds.

The second part of this evening was the awards during members of the community were recognized for their outstanding services to the community. They include: Dr Mal Fobi who flew in from California to receive his award in recognition of his excellence in health especially with his bariatic surgery that helps in obesity. Another medical doctor, Dr,GeorgesAwah of Washington Hospital Center, Dr. Mrs. Marie BibumSohna, Pharmacist, Bikundi Florence owner Global healthcare, Dr. Chienku, Dr. Makia and Dr. Bisong Henry of the AnomahNgu research center Cameroon of all bagged various awards.

The third leg of the event focused on fundraising and many people donated generously in support of the mission and aspirations of the foundation.

KWD – Kelly Weddings and Décor graciously sponsored the event and catered every aspect of the event. This is a Cameroonian outfit that specializes in events management and party decorations.

Accreditation& Partnerships:
Thanks to the assiduity and ingenuity of the Vice President of the foundation, Julius Bakari, the foundation achieved yet another partnership with an Indian NGO namely: Peter Peace Mission Trust. Dr. Stanley Peter, Executive director of the trust sent a video message of support to the foundation on the occasion of its launch.

At yet another level, The Agatha Foundation added yet another red feather to its pedigree as she gained Special Consultative status with the Economic and Social Council of the United Nations. 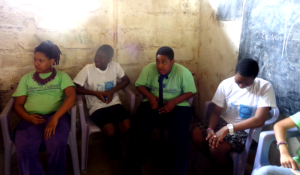 Mission to Cameroon: December 2013
In December 2013, the president and vice traveled on mission to Cameroon. For over two weeks they strengthened the home office getting new office space in Limbe, South Wes Region and hiring new staff who would manage the affairs of the foundation in Cameroon and Africa.

The Agatha Foundation also unveiled its library project as they unloaded books donated from across the United States of America. These books cover a wide spectrum of subject areas. 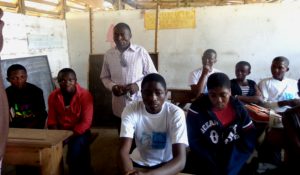 The Foundation also partnered with the Washington Lockridge Foundation who brought kids from Washington DC area to Cameroon for an exchange program with The Agatha Foundation S.T.E.M students. During the cultural exchange, students from DC shared insights with their Cameroonian counterparts on education in the US and life in general in the US. The students were also introduced to cultures of the region and it was quite an enriching experience for both parties.

Other Activities:In furtherance of our goals to promote women and enhance capacities, the foundation partnered with a group of farmers in Limbe and set up a cooperative like structure. Through this initiative, the foundation supplies fertilizers to the women and is building up a cohesive structure through which they would be able to market their products and cash in at a premium level.